It’s time for the fair that you’ve been working on for so long to open its doors: The day has come where a fair opens and the hustle and bustle of networking begins. Anyone who has ever exhibited professionally at a trade fair knows how much work, passion and time is involved to organize every last detail. We’ve already told you what’s behind organizing several fairs a year.

But what actually happens the week after a trade fair? What are the tasks and what is the follow-up like?

The Hannover Messe – the largest industrial fair in the world – took place from April 1-4, 2019 and we were there. Together with Telekom, we presented our use case for cost reduction through data analysis at the IDS joint stand.

During a trade fair like this you have an endless number of conversations – and that’s exactly what you have to deal with when the eventful and stressful week is over. 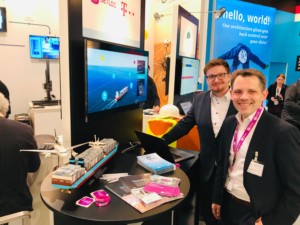 The first days after a trade fair are always the most intensive. First, you have to get back to the office and review your impressions. Then it’s time to document everything and to get in touch with the colleagues who were also there.

The following questions must be answered:

Once these questions have been answered, further planning can begin. Contacts made must be entered into the database – all in compliance with the GDPR, of course – and then served with the information they have requested.

A brief comparison with the previously set objectives provides information on how successful a trade fair really was. Different aspects are important here. Some events clearly serve to win new customers, others to build networks, get press or reach qualitative goals.

The Hannover Messe was clearly about presenting the use case that was created with Telekom in the last year and a half. The network around the International Data Spaces Associations also played an important role. As part of the Association, the joint work is of course very important to all members.

The impressions we gathered at the joint stand were many and require their own processing.

The exhausting thing about the first week after a trade fair, apart from the numerous documentations, the catching up that has to be done, is clearly also the tiredness. Trade fairs are always a crazy affair. You don’t just go to the office and do your work.

Trade fairs start early and end relatively late. There are no clear working hours, as one or two conversations can sometimes extend beyond the opening hours. Not to forget, of course, the trade fair parties. One does not go to the big events of the industry just to participate in the parties but they are definitely part of the whole experience and an important part of networking. The competition will certainly be there, too!

So it happens that apart from long working days, which mainly consist of standing, talking, walking and little rest, you also have longer nights. 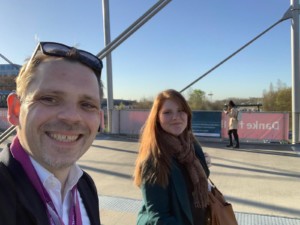 At this year’s, Hannover Messe there were many startups present who are really shaking up the market at the moment.

This was also noticeable during the days and evenings at the fair. It is always important to see what the young, dynamic companies, which are not squeezed into any framework, are producing.

Spending one or two evenings with them also helps one’s own work.

Thus, it happens that after exhausting days and nights spent in overbooked exhibition hotels instead of your own bed, you are thrown back into everyday life.

Tiredness, aching feet and somehow the need not to talk for a while are mostly symptoms of the week after a trade fair.

You feel like you’ve been away forever and you don’t even know how you did your daily work before. Getting back into the process and cross off your own to-do’s is what has to happen next.

On average, it takes about a week after the trade fair to have the feeling of being fully involved in the actual work again, to have worked through everything from the event and to put an end to the trade fair time with a clear conclusion.

Let’s be honest, especially in such a stressful year as 2019, after the fair is before the next fair anyway.

And all the fun starts all over again….

See you at Texprocess in May 😉