Four Setloggers on an expedition to a distant country – Javaland. 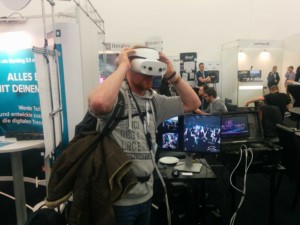 Setlog has its own budget for training events within IT.

To get an overview of possible training courses and to see who is interested in the same events, we have a training wall since this year.

On this training wall there is a picture with a sticky note for every IT professional.

On the sticker you can write the name and date of the trainings you are interested in.

These entries can be supplemented at any time and are completely non-binding – it is only a matter of expressing interest.

If you want to be serious and really go to a further training, you look for comrades-in-arms, discuss your wish with your team and the CTO and can usually look forward to an acceptance afterwards.

For me that meant the beginning of the year: DevOps Gathering and Javaland on my sticky note.

It’s only a week in between, but it doesn’t matter.

One shouldn’t miss a chance.

I’ve been to the DevOps Gathering in Bochum several times, but never in faraway Javaland.

Last year I had already played with the idea of going to Javaland.

However, I could not estimate how serious the event is.

The event programme looks promising, but a conference at Phantasialand – a theme park?!

I wasn’t sure if it was just an alibi event to ride a roller coaster at the company’s expense during working hours.

As far as I know, no Setlogger had ever set off on an expedition to Javaland before.

So I couldn’t hope for an assessment here.

So all I could do was exchange ideas with explorers outside Setlog.

Nobody could confirm my fear – so Javaland really seemed to be a serious expedition destination, comparable to the JAX.

For me this means: This year we are going to Javaland!

Provided, of course, that I get the expedition approved, which shouldn’t be a problem.

After all, I wasn’t the only one who wanted to go to Javaland: There were four of us.

First we talked to our teams and the CTO, everyone agreed.

Then we ordered our tickets, found a hotel nearby and reserved a company car for the expedition.

On the 15th of February my badge, my passport, came to Javaland by post.

On Monday afternoon, 19 March, we finally got going.

At 16:00 o’clock we went into our underground garage and looked for the right company car.

So once pressed on the radio key and heard, from where a noise comes…

Direction’s been picked up, but no car flashed there.

Well, in our underground car park each parking space has its own car elevator, so you can store two cars on top of each other in one parking space.

And our car just stood downstairs.

So: drive up the elevator, park the car, and drive the elevator back down to the starting position.

Then quickly refuel and go shopping for provisions and then always follow the navigation.

Arrival at base camp

We did not set up the base camp of our expedition directly adjacent to the Javaland, but a walk away.

The surroundings of t 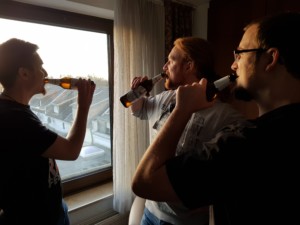 he base camp are quite small and idyllic.

After a break for drinks we started our search for food.

We hunted and shot pizza, noodles and a burger.

Afterwards there was a nice game evening with various games, as for example a computer quartet.

The first day in Javaland

Tuesday should be the day: For the first time in our lives we entered the legendary Javaland.

We got there in time so that we could take a little walk to look around.

Then we went to the first lectures.

For me this was *test automation without assertions*, a very good lecture.

Besides the actual topic, I also learned that the concept of hidden files under Unix was actually [a bug].

Knowledge from the category unusual party knowledge for nerds, but very interesting.

After the first presentation the greeting came.

There we got to know the usual greeting formula: Jatumba!

And we got to know the most important numbers of this country: It is the 6th Javaland and has 2092 inhabitants – four of them are now Setloggers.

There were 8 workshops and 21 community events planned.

That’s a little over 98 hours.

In other words, it’s more than eight times as much as all three parts of Peter Jackson’s Lord of the Rings movie in the Extended Edition.

There were also almost tears on stage: The editor-in-chief of Java aktuell was dismissed because he is retiring.

The greeting was followed by a keynote that began very promisingly.

It was held by Ed Burns, a person who helped develop Mosaic – one of the first web browsers ever.

Later he was involved in other major technologies, including JavaServer Faces.

He told what factors were responsible for the breakthrough of technologies (such as the World Wide Web).

In his opinion, one reason for the success of the WWW was that people can easily copy and adapt the html source code from other websites.

This lowers the hurdle of dealing with technology.

Other technologies followed as examples and why they were successful.

In the second part of his keynote, Ed Burns compared *Java* to the programming languages *Python*, *Golang*, *JavaScript*, and *Swift*.

This part of the keynote was…

Well, let’s put it this way: maybe a little biased.

Personally I like Java, otherwise I wouldn’t have landed on an expedition to Javaland.

But a more neutral view would be better than bashing the other programming languages with arguments that are at least partly not really convincing.

Afterwards I went on to the next lecture.

Of which I couldn’t take up so much anymore: The hunger became too big.

But we should get some food afterwards.

Since I was very hungry and the snake was not there yet, I had first got chicken nuggets with fries in order not to starve.

Afterwards we Setloggers went to eat delicious burgers together, in the meantime the queues in front of the restaurants had grown quite a bit. 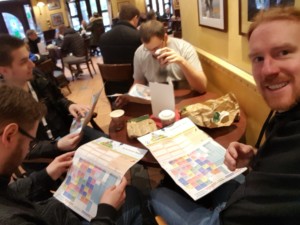 Unfortunately, due to the food for us a timeslot with flat lectures.

But it’s better to be mentally absent with a hungry stomach.

The day went on with many exciting and interesting lectures.

Especially noteworthy is the last lecture for me that evening: Revisiting Effective Java in 2019 by Edson Yanaga.

The talk was about the book Effective Java by Joshua Bloch.

I had heard about the book before, but I had never read it before.

That will certainly change now.

Live coding on 40-minute lectures is actually a bad idea: Normally things go wrong and the listeners can no longer understand what the speaker is doing.

And it was… Terrific!

It was easy to follow, better than typical slide presentations.

This shows that Edson Yanaga must be an experienced speaker.

He showed some things I didn’t know after more than 15 years of Java programming.

On youtube you can find the same talk from another conference, as well as a 2.5-hour version.

On the evening of the first day, the Javaland inhabitants celebrate the Open Park.

There is a lot of delicious food and some rides are open.

So after the last lecture my colleagues decided to ride a roller coaster.

They were especially impressed by the Taron.

I’m not a roller coaster fan, so I had a delicious dinner in two restaurants and went for a walk in Javaland.

Here I enjoyed the special atmosphere of the amusement park after sunset.