We are looking back on 2003 – year of the Hanjin Basel. With a length of 273 metres, a width of 40 metres and a carrying capacity of 68,200 tonnes, the Hanjin Basel was then the largest container ship in the world. We were so proud that some of Setlog‘s customers were loaded on this ship and that we were by that represented on this ship, even if only indirectly. If you look at the capacities of Hanjin Base today, you can only smile about our pride at that time. 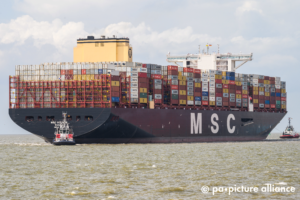 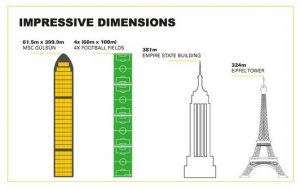 The MSC Gülsün, which sails under the Panamanian flag, was built by Samsung Heavy Industries (SHI) in South Korea at the Geoje shipyard, started her voyage in Tianjin/China in July and called at Bremerhaven on the 19th of August. The ship is equipped with more than 2,000 reefer containers and thus promotes the trade of refrigerated and frozen goods between Asia and Europe. A giant of the seas, which of course does not only receive applause and approval.

A newly developed bow design reduced the hull resistance and thus the air resistance which at the same time reduces fuel consumption. The improved energy efficiency ensures that MSC is on course to meet the environmental targets for 2030 set by the International Maritime Organization (IMO) of the United Nations (UN) ahead of schedule. This is done on the basis of a 13% improvement of CO2 emissions per tonne and load achieved by the entire MSC fleet between 2015 and 2018. 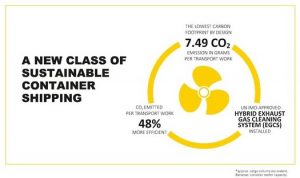 MSC strives for innovative solutions, especially in the areas of environment, health and safety, which are consistent with the philosophy of the family business. This is shown distinctly by the 2017 Sustainability Report. MSC promotes focussing on cleaner seas, countries and cargo through massive investments in low carbon technologies, energy efficiency and operational efficiency.

Now, of course, one can question whether such giants, precisely because of their size, produce significantly more CO². To do this, you have to take a quick look at how much the MSC Gülsün is able to load: 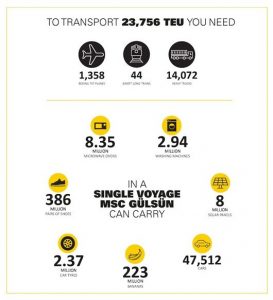 144 km containers, if they are put one behind the other. This would fill the entire A27 and part of the A1 from Bremerhaven to Vechta with containers.

The graph shows more than clearly which alternatives would be necessary to replace this single means of transportation.

The MSC Gülsün and its 10 sister ships are all designed for future developments in digital shipping. Fast data transmission on land and the possibility of connecting Smart Containers contribute to making sea freight more transparent, safer and more reliable.

With all the innovations and the higher-wider-bigger-more philosophy of the giant ships, the capacities of the ports must of course not be disregarded. The European ports fear that the next generations of ships will become bigger and bigger, and that ever greater investments will have to be made in the infrastructure of the ports. Turning circles have to be created and quay walls must be matched to the giant ships, the fairways have to be deeper and wider. In Hamburg in particular, this is an issue that must be addressed if we are to survive in an international comparison. There is a reason why the “Elbe Deepening” mega-project is being implemented for 700 million euros. In addition, the width of 60 metres poses a challenge to the gantry cranes at the quay. MSC Gülsün has loaded 24 containers next to each other instead of 23, and even in Bremerhaven only two gantry cranes are able to extend to this width.

If you sit on the beaches near harbours and watch the hustle and bustle on the water, you can hardly count the numerous container ships passing by.

Seafaring is in full bloom and both cruise liners and container ships are becoming oversized.

To us, just like to most people in the world, this does not only represent advantages, but also negative effects. For example, there is the matter of increased environmental pollution. Despite MSC and other shipping companies doing more to lower emissions, it cannot be denied that the large ocean giants account for a significant proportion of environmental pollution.

On the other hand, as a supplier of supply chain management software, we are always aware of the challenges our customers face when it comes to shipping.

We at Setlog support our customers in optimizing their supply chain. It goes without saying that the majority of the goods they produce are transported by ship and that is completely legitimate. Nevertheless, not all that glitters is gold and that goes for ships as a means of transport too.

They are unpunctual, difficult to time and you have little control over what actually happens to your own goods as soon as they are loaded on the ship. Hardly anyone wants or can afford to pay the sums that are charged for unloading containers at a stopover port, for example to change the means of transport.

Of course, a lot more goods can be transported on a giant such as the MSC Gülsün. As already mentioned in this article, it would be almost impossible to deliver a mass like this in any other way within the same timeframe.

It remains to be seen how this will be expanded in the future.

We think that the MSC Gülsün will not remain the largest container ship in the world for long and that the next generation will surpass it many times over. And we are hoping that the successors will always focus on the environment and Co² emissions as well. Until then, we wish the MSC Gülsün a good journey at all times and a handful of water under its keel.