I am the youngest of three girls – but what does this have to do with secondhand or even sustainability? With families where money is tight, and that’s how it was with us, you just have to keep the household well organized- with all the resources you have at your disposal. Even with children’s clothes, which were still good, but the older children had already outgrown them. Usually my mother made sure that the clothes were always passed on to the next child. At that time, clothes were handled very carefully, one of many behaviors that I have adopted from my upbringing and still live. This meant that my clothes were already worn by two sisters before me – a horror if you are a certain age – which in retrospect was right and good. So, I learned to appreciate values. It was our way of “second-handing” and passing on clothes that no longer suited us.

Secondhand is not an invention of extended families. The term was already used in England in the middle of the 15th century and describes the passing on of things – from one hand to the other.

France and Belgium are probably to be regarded as the countries of origin for the purchase and sale of secondhand articles: It is said that flea markets were organized there from around 1880 onwards. There used clothing and objects changed from the first to the second hand. The first flea market in Germany, on the other hand, took place comparatively late: in 1967, the action artist Reinhard Schamuhn organized a flea market in the old town of Hanover. To this day, this is a popular platform for a change of ownership of a wide variety of things, although it goes without saying that there are now also secondhand shops or secondhand online shops.

But what distinguishes secondhand and where does sustainability come in? Let’s take a look what is actually needed for the production of a pair of jeans.

Dyeing, washing, dyeing again, tailoring and washing again. Chemicals that are needed to produce jeans can be hazardous to health and must therefore be washed out before the goods are sold – usually even before they are exported from the country of production. Around 8,000 liters of water are used to produce a normal pair of jeans. Since jeans are not produced just around the corner, the standard jeans are already a globetrotter:

– Weaving mill and thus the production of denim fabric in Turkey

– The threads for the seams are spun in Taiwan.

– In Poland, the indigo dye (blue) is usually produced for dyeing denim fabrics.

– Tunisia is the land of the dyers

– The finishing of fabrics such as soft, crease-resistant or similar can be realized in Bulgaria.

– And in China, it all turns into a pair of jeans we like to buy here in Europe.

– In Europe, these jeans are usually also ironed neatly for optimal presentation to the customer and loaded hanging to the end customers.

It has covered about 60,000 kilometers before it arrives at our shops. In any case, this is not environmentally friendly. And if it is only thrown away after a few years, it is anything but sustainable.

The ubiquitous and explosive issue of sustainability does not leave the fashion industry untouched. The question is why secondhand fashion in particular is so sustainable. The answer is obvious: used goods already exist in countless numbers. So, they no longer have to be produced. Secondhand clothing is even less of a burden on nature than fair fashion can ever succeed through the use of natural and environmentally friendly materials.

Conclusion: buying secondhand fashion does not boost production, nor does it require new raw materials, let alone the use of environmental toxins. Existing abrasion is slowed down and the impact on people and the environment is reduced. Zalando, one of the largest fashion online retailers, is currently jumping on the secondhand wagon and is active on the market with its zalando wardrobe. In the wardrobe, the end customer’s favorite pieces are sold back to Zalando. It would be nice if this business model would prove itself. I am curious to see who else will jump on this wagon.

Secondhand clothing is actually a prime example of a successful form of sustainability. But what if you simply can’t reconcile the idea that someone else has worn this jacket, trousers or blouse with your personal well-being, but at the same time you want to save resources and your wallet? On the one hand you can learn to tailor. Yes, that’s no joke. There are many schools and also fabric shops where you can learn to tailor for private purposes and therefore make home-tailoring fashionable again. This is exactly how you can apply this craft to yourself and simply spice up the blouse that is no longer hip. There are meanwhile many tutorials to the so-called Upcyling in which many suggestions can be found.

There are good reasons for secondhand:

1.) Secondhand is a clear statement against today’s throwaway society.

2.) Secondhand, especially fashion, is something for individualists. In times of growing fashionable branch conformity, secondhand clothing always offers the chance of a little independence in outfitting.

3.) Secondhand saves money. Because secondhand is – despite numerous cheap productions at the market – usually cheaper than new goods.

4.) Money can be saved with Secondhand especially with children’s clothing. Especially when it comes to dressing several children. “Used” in this area is by no means to be equated with poor quality. Children grow out of their clothes relatively fast and therefore secondhand items are often hardly worn or in almost mint condition. Also, the health advantage compared to the new goods is not to be rejected, since these were surely already washed several times. More frequent washing results in significantly fewer chemicals in the fibers than with new material.

5.) Secondhand is an active contribution to environmental protection. There is no packaging or waste because neither new packaging nor new fiber material is produced for Secondhand goods.

In addition, the mass of articles to be disposed of is reduced.  Many consumers are unaware that, for example, old textiles are in many cases simply incinerated and thus produce highly toxic gases that escape into the atmosphere. The residues of the burnt clothes represent additional and high pollution of the environment. 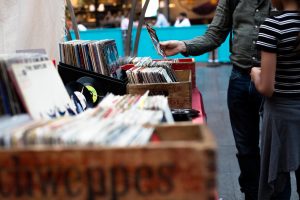 Ultimately everyone must decide for themselves what is best for them and how they can defend their own actions. Personally, I like a mixture of both. I like both new and old. Fashion is not a force of nature to which you are subjected. It arises in the minds of creative people. That’s why I don’t go with every trend, but search above all for what I like. And I like to pass on my clothes from which I “grew out” to my friends and acquaintances.

August 25th is, by the way, the day of Secondhand clothing, did you know that?

Secondhand might be old clothes or junk for some, but for others it is an inspiration. A warming or urgently needed item of clothing or furniture and furnishings that you have been looking for, for a long time.