Get into the comfortable armchair, take a sip of coffee and you slowly sink into your thoughts that pull you deeper and deeper into the problem spheres that open up in front of you. 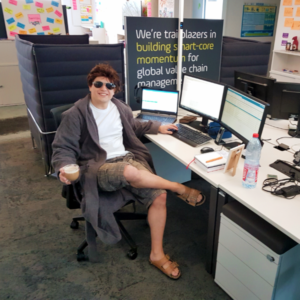 A shining path or red thread of a concept appears in the spiritual sky and the ship of uruction sets itself in motion slowly and sedately, while the thoughts race at the speed of light, jump back and forth in time, rummage through libraries and visit various places with strange names. Sometimes it’s a harbour full of ships that have to be loaded with containers, sometimes it’s the smithy where the Boilerplate code is to be cast and riveted, and then suddenly it’s the database where the most valuable treasure – the information from the data – lies dormant and wants to be raised.

The images in the mind’s eye change stroboscope-like – to the outside it seems like multitasking – but in reality it is an insanely fast sequential processing that is reflected in ever faster staccato on the keyboard – cheered on by the electronic music from the headphones.

One glides on the wings of inspiration – everything seems light and logical. It is fun to construct and to construct in such a way that the result meets one’s own and the general quality requirements.

Nothing can stop you, even if you consult the knowledge from the Intra- or Internet in between. You grab it with the ease of a juggler, who sends the balls in highest concentration with an unbelievable precision again and again into the trajectory, into orbit.

Although one races through the virtual hyperspace of the development with an unimaginable speed, the time passes even faster and one notices with dismay how long one has been sitting here and what a mountain of tasks still piles up in front of one. It is a paradox similar to the theory of relativity and comes very close to the phenomenon of time travel. The realization of the loss of control over time has a defocusing effect and the journey begins to wobble, leading to collateral damage and course deviations.

To counteract this, one arranges one’s notes and documents the concept developed so far in one’s head, but it is like in the quantum cosmos: if one takes a closer look at a certain element, one changes it at the same time, so that the original design slips away more and more the more one loses oneself in the meta-level.

You leave the building site without further ado, consult the specifications again, play through the process again in your mind – and are dismayed to discover that the original assumptions are not correct and that you have to take some steps back!

A paralyzing cramp goes through the innermost being. One loses the feeling for the body and at the same time it is suddenly very present: fullness, numbness, burning eyes, a sweat film covers the forehead.

Hectically you jump back in time and try to straighten everything out with as little effort as possible, steer the ship on the right course and get the curve. You have to rebuild, rebuild and disassemble.

Time is pressing, everything itches, you want to drive, whip and scratch, bite your lips and fingers, chew your fingernails full of impatience and burning ambition.

It’s actually the end of work, but you don’t want to stop. One cannot stop, not in this state of nervous shock, disruption and imbalance in which the body and the mind are at the moment. This will not work – the thoughts will not calm down and the spirits called will torture and afflict the already maltreated soul all night until dawn.

So on, the path must be followed to the end and you must force yourself to walk on the light at the end of the tunnel – oh what tunnel – of the labyrinth.
And then it comes. All of a sudden, almost unexpected and almost surprising. You stare at the screen and can hardly grasp, comprehend or even believe it.

It runs the way you imagined it would – it lives, it lives! You have created something new, wonderful and unique – still small and awkward, but it lives and crawls, runs and reacts! For a tiny overwhelming moment one is God who creates worlds and gives life.

Astonished and full of happiness one looks at the result of his work. One is exhausted, bathed in sweat, trembles all over, a slight feeling of nausea overcomes one, but – and this is the most important thing – one is happy!
And yes, it is only with this uplifting feeling that it is really worthwhile to start the day.

Eduard is software developer in our team “Globetrotter” at Setlog. Globetrotter works closely with our NYC team and is responsible for our American customers. Eduard is one of our most creative minds, always eager to give himself new ideas to show what life is like at Setlog.