After the introduction and warm up of the workshops the day before we were eager to learn more about the theoretical concepts and specific real-life experiences behind the technologies. We were like wolves who tasted the blood and from now on never would let go from hunting the deer.
A long day lay ahead of us – first the exciting conference we’ve been waiting for since last year with lots of new, hot stuff and second, meeting people who walk in your shoes. From the first word they instantly understand each other because they belong to the same craft – IT. Afterwards: a big conference party with drinks, food, live music and the incredible photobox of my colleague Tobias. 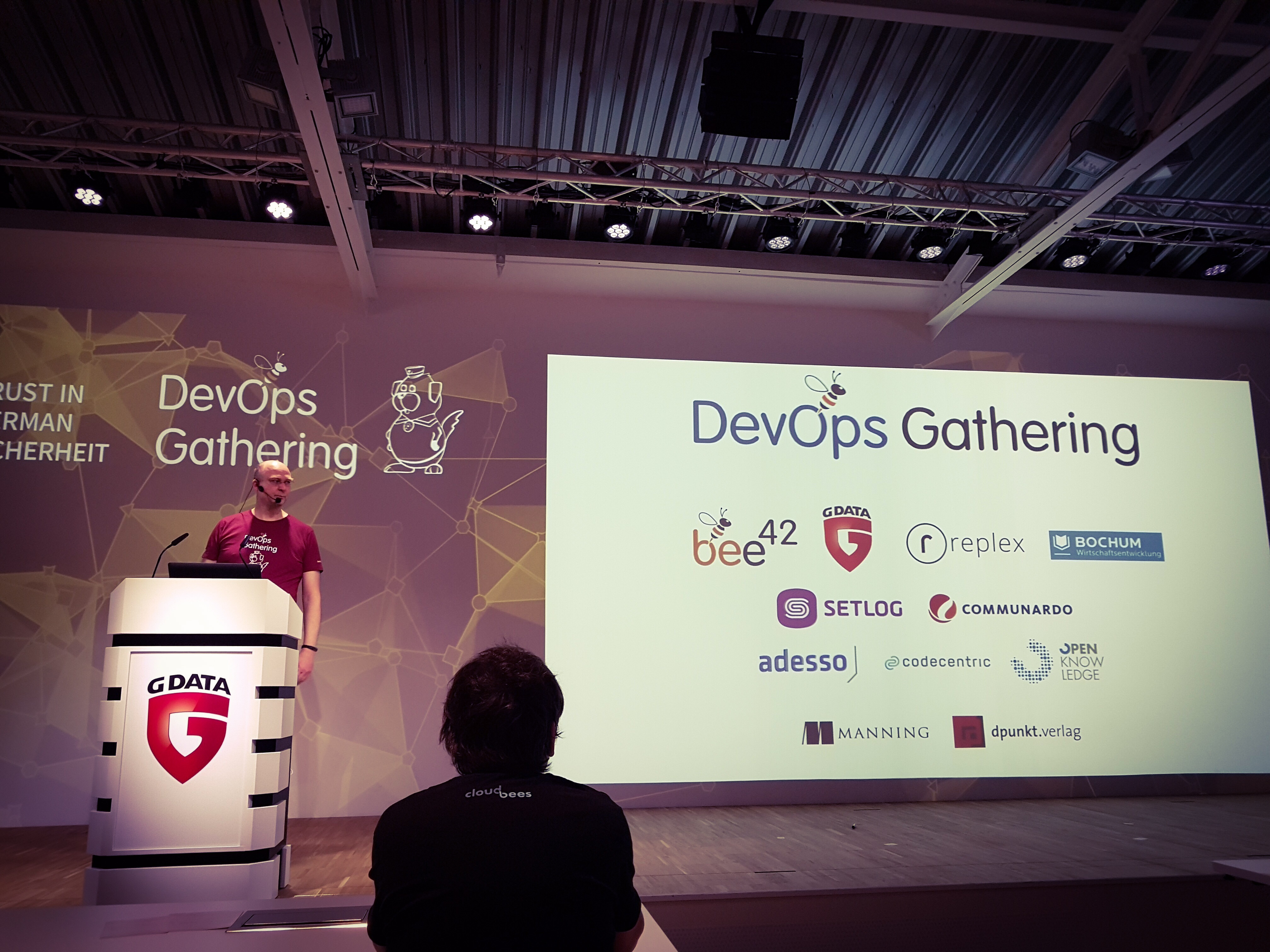 The Talks
Before the talks started the co-founder of GDATA and the host of the conference, Andreas Lüning, welcomed the audience. For this day 8 talks with headliners from the DevOps world were planned. Quite a lot of information coming down like machine gun fire, opened the minds and made the hearts beat faster from the overwhelming excitement. Thank God, everything was filmed and will be published on YouTube, so we can recapture the lessons learned.
I won’t write down the whole content of the talks in this article. If I would do it in full detail this would definitely fill a book. For that I will start separate documents containing summary keynotes and links. I’ll publish them especially in the local Wiki of my company and then the time will come to share our acquired knowledge with other colleagues, e.g. via Lightning Talks or maybe even in a Meetup. The following sections will only show some key points of each talk: 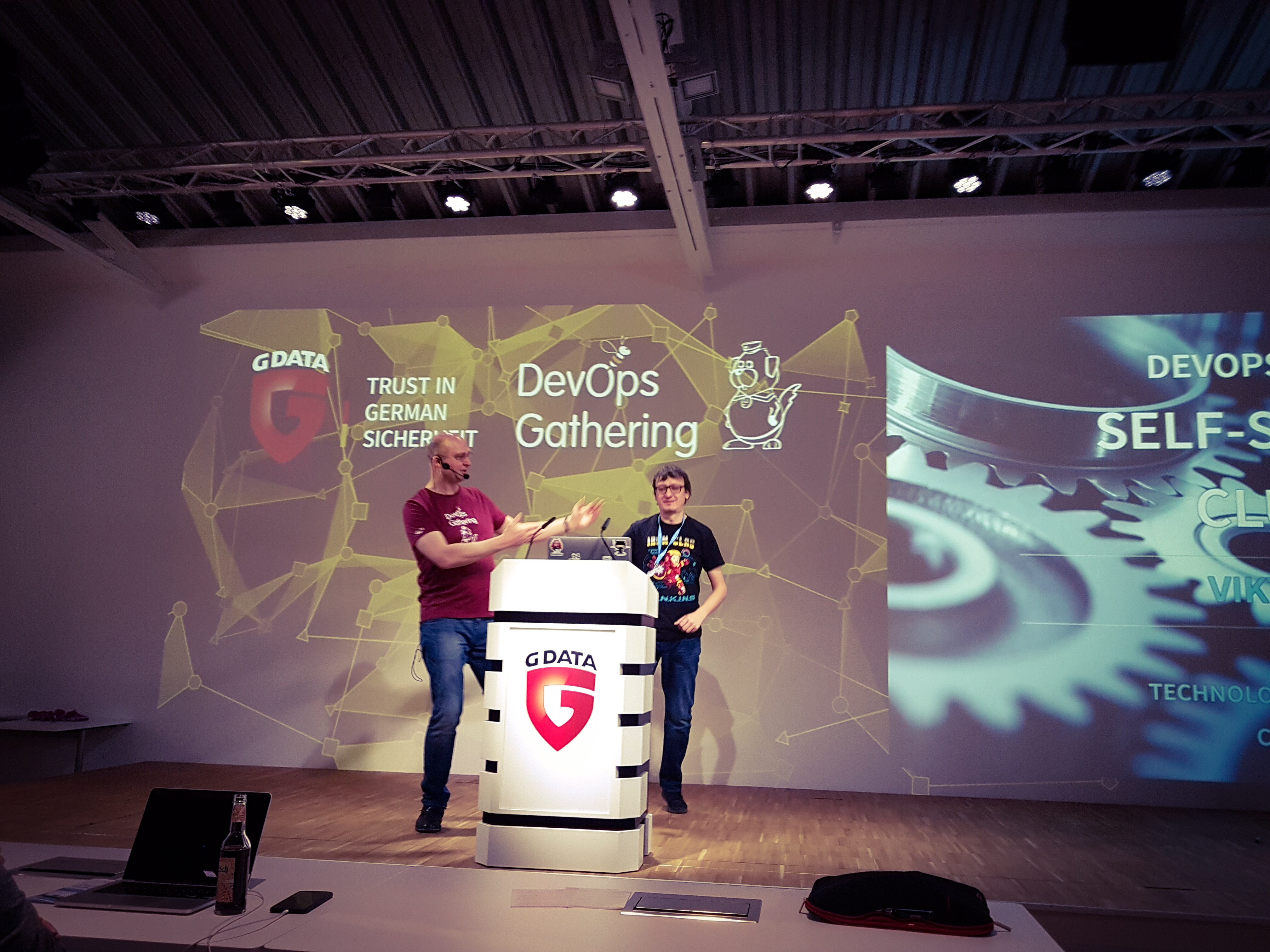 Victor Farcic explained the theory behind his workshop “Building a Self-Sufficient System” of the day before. The services should be exchangeable like animals in a cattle – if one dies it should be exchanged immediately and automated. This can be done mainly using microservices, Docker and Kubernetes. But there’s a long way to go: “Only 5-10 percent of all companies are using those technologies, then there’s a big emptiness and then there is the rest.”
João Santos showed to the audience the “CI / CD at Zalando” infrastructure. Each team in its company is technically completely separated from the others, e.g. each team runs it’s own Jenkins instance. This way there’s no impact from one team to another. 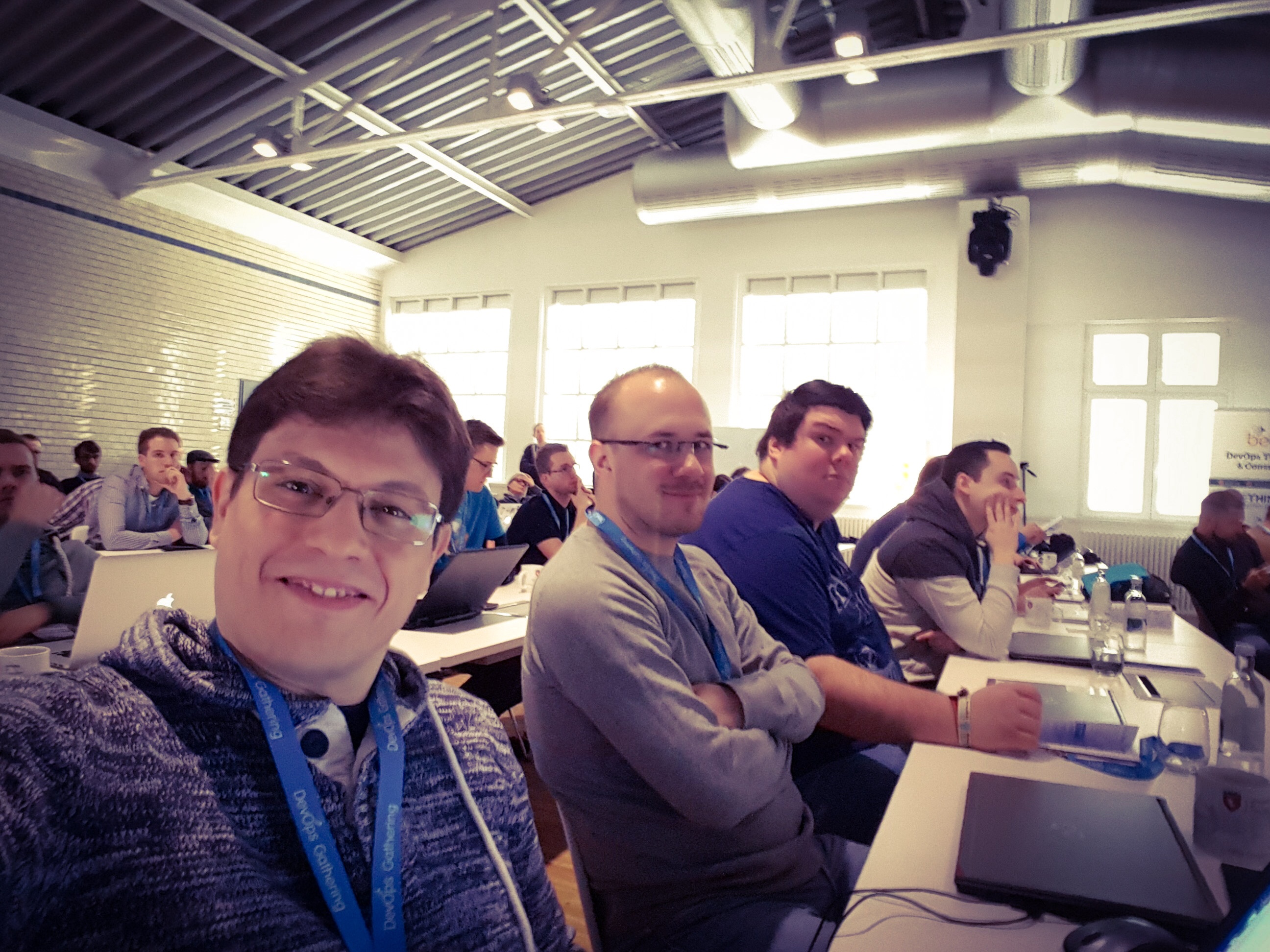 Nicolas Byl from codecentrics explained in his talk “Stateful Applications on Kubernetes” that you cannot implement any system without states. Database is usually the bottleneck, because it does not scale good enough. One of the solutions: attaching storage to a container. That means connecting to a container and the storage has to follow the container. 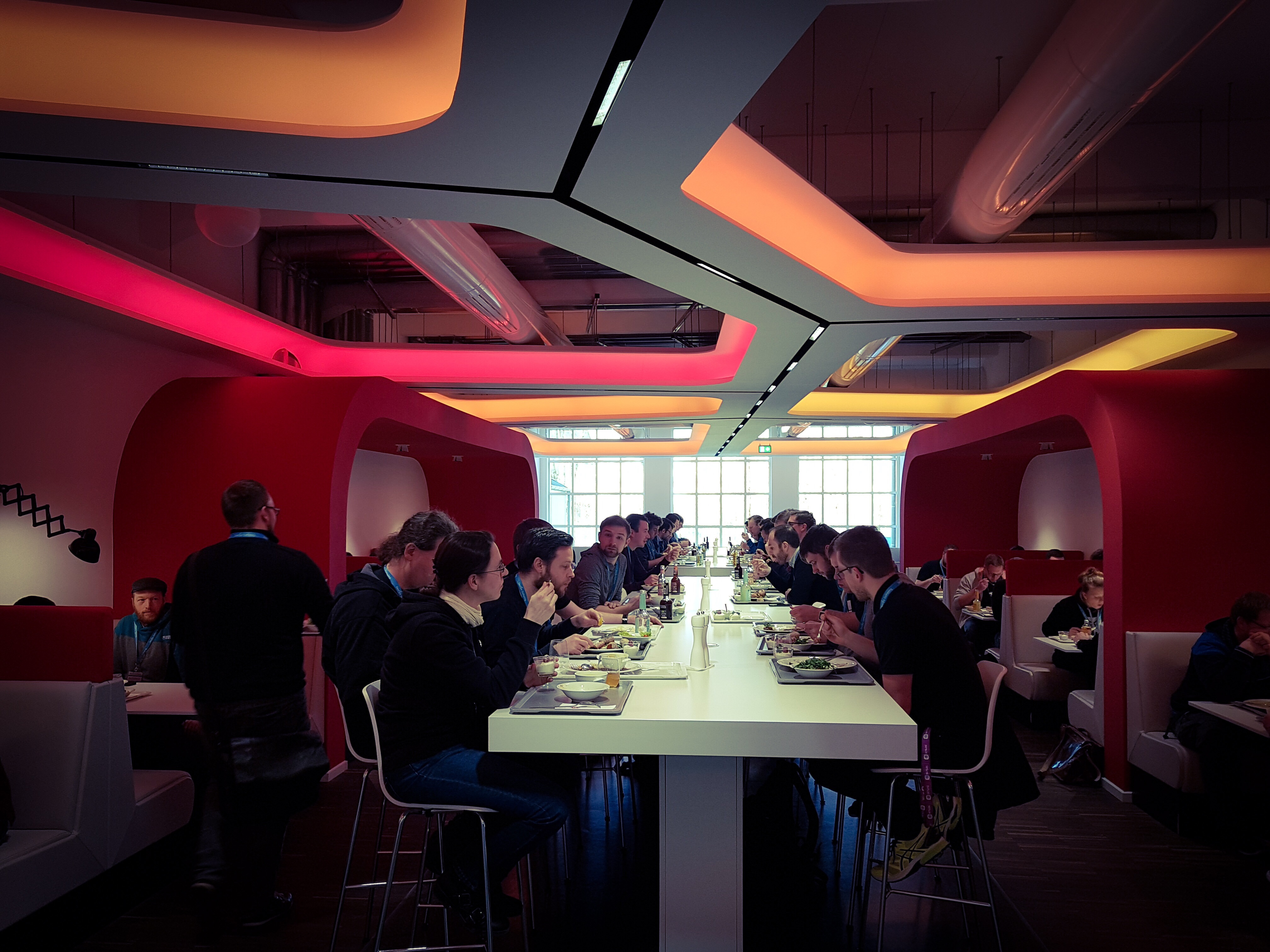 One of the many good things you can say about GDATA is that they have a fantastic canteen serving incredibly tasty food for their employees and for us, the participants of the conference. At lunchtime we finally have received our blue conference t-shirts. But instead of getting blue we were thrilled even more and could not wait for the next talks. During the lunch break there was plenty of time for relaxed networking with ‘DevOpsers’ from all over the world.

In his inspiring talk “Docker: Ops Unleashed” Mario Kleinsasser from STRABAG showed how it is possible to run 1545 services connected to 280 load balancers with only 3 people to maintain it. The solution is of course automatization: “The more you try to get out manually the more you get stuck into the quicksand.” To realize the automation you need to fulfill the three preconditions:

Or in short: “If you don’t have the time to learn, you cannot be creative and innovative.” 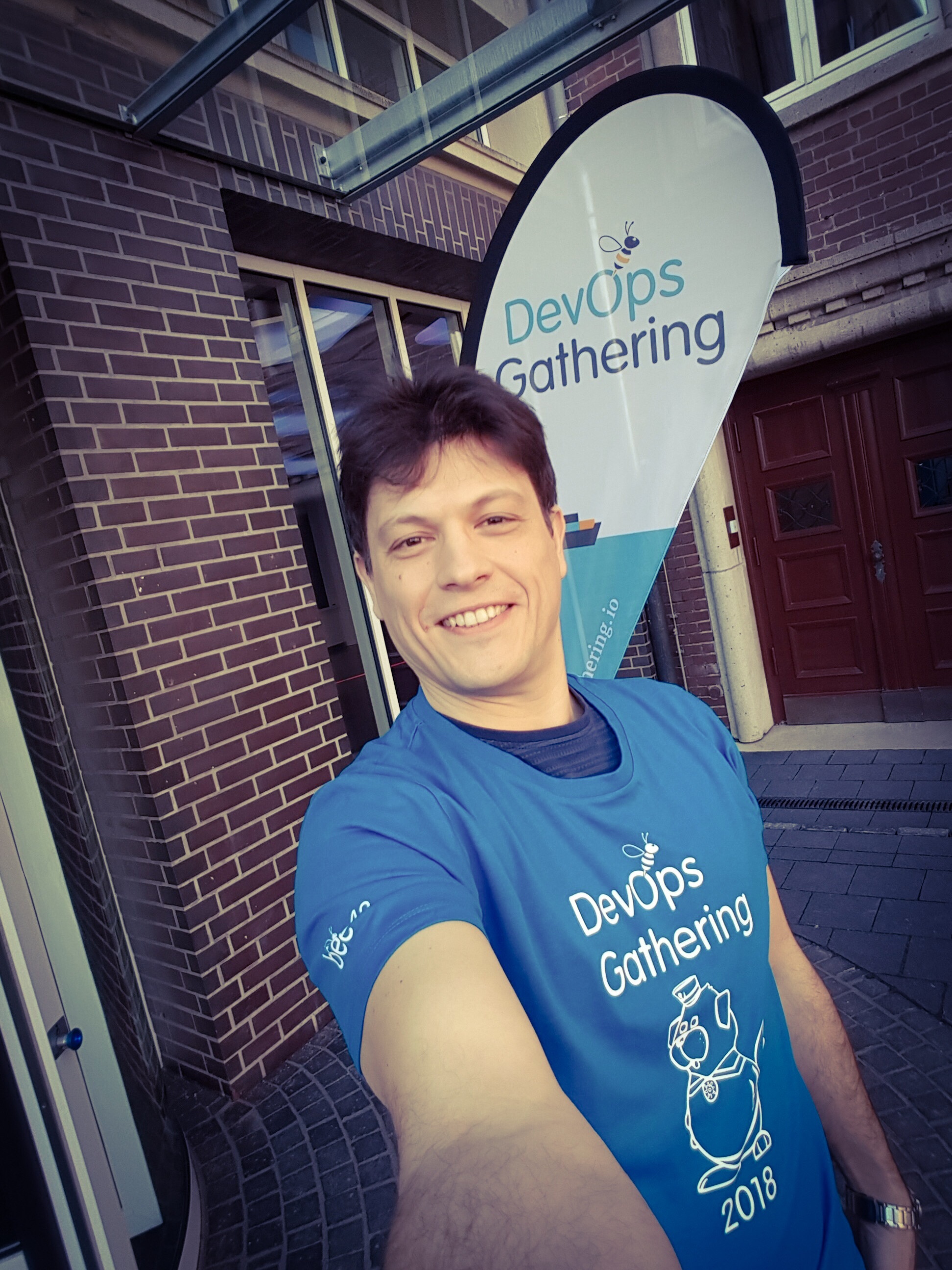 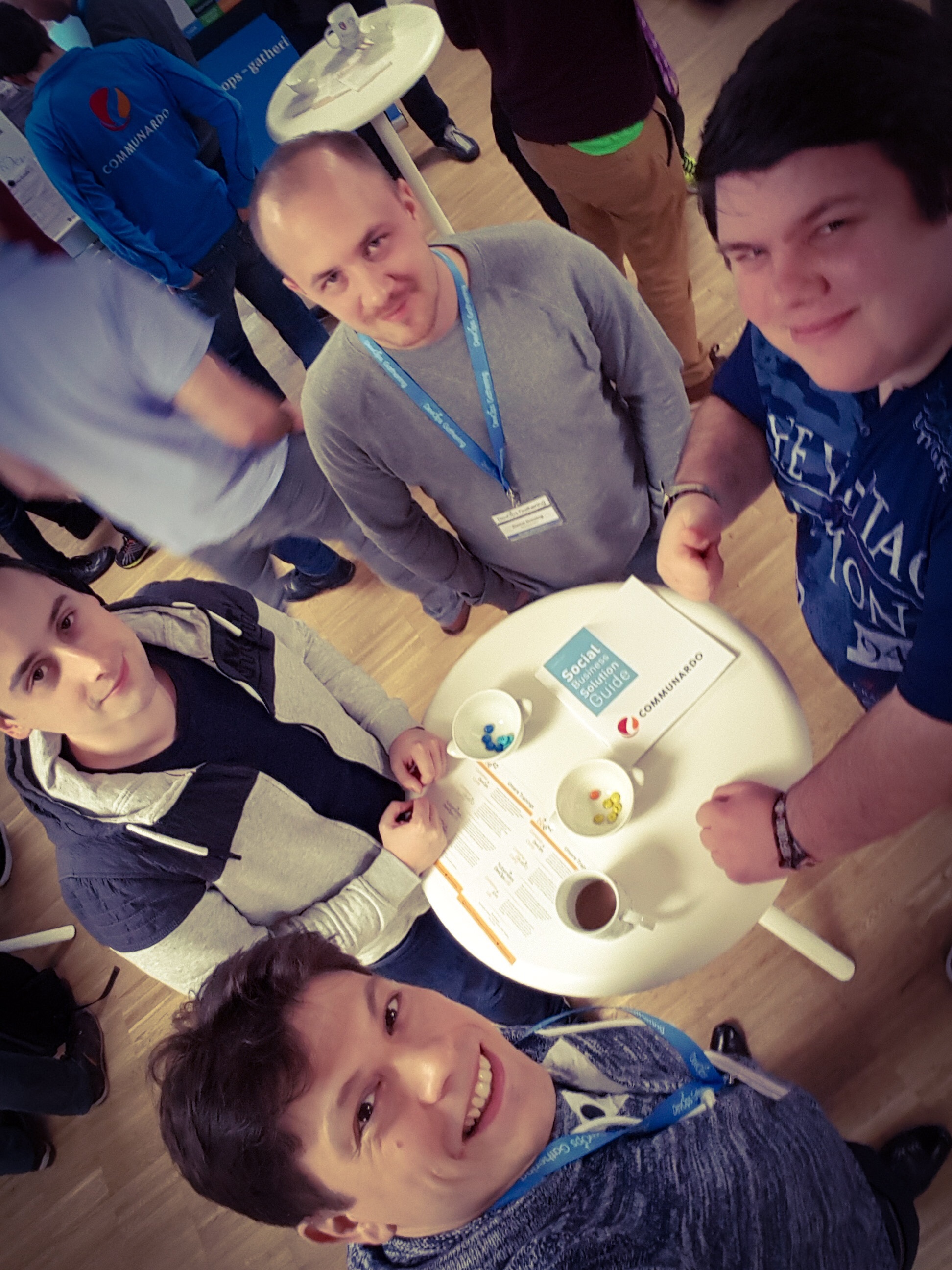 Of course there are best practices for DevOps as Thomas Fricke from Endocode has shown in his talk: “Architecture Patterns for Micro services in Kubernetes“. It was based on the paper “Container Design Patterns” by Brendan Burns and David Oppenheimer. Some of the most common patterns repeated in several talks were: leader election, locomotive pattern and sidecar. So, before you configurate something try to find the right pattern. As an interesting fact how a Kubernetes infrastructure could be used for denial of service attacks, Tomas Fricke demonstrated a busybox-cloudbox hacking script which created infinite containers in an endless loop without Kubernetes taking notes of it. “Don’t do this in production!”
The talk “The Modern IT Stack” by Christian Daschner and Patrick Gruhn from replex.io showed in an impressive way how an efficient microservice infrastructure can be designed. It is very important to make meaningful connections between different metrics and of course the knowledge sharing. You’ve got to make the colleagues understand the efficiency of the system. 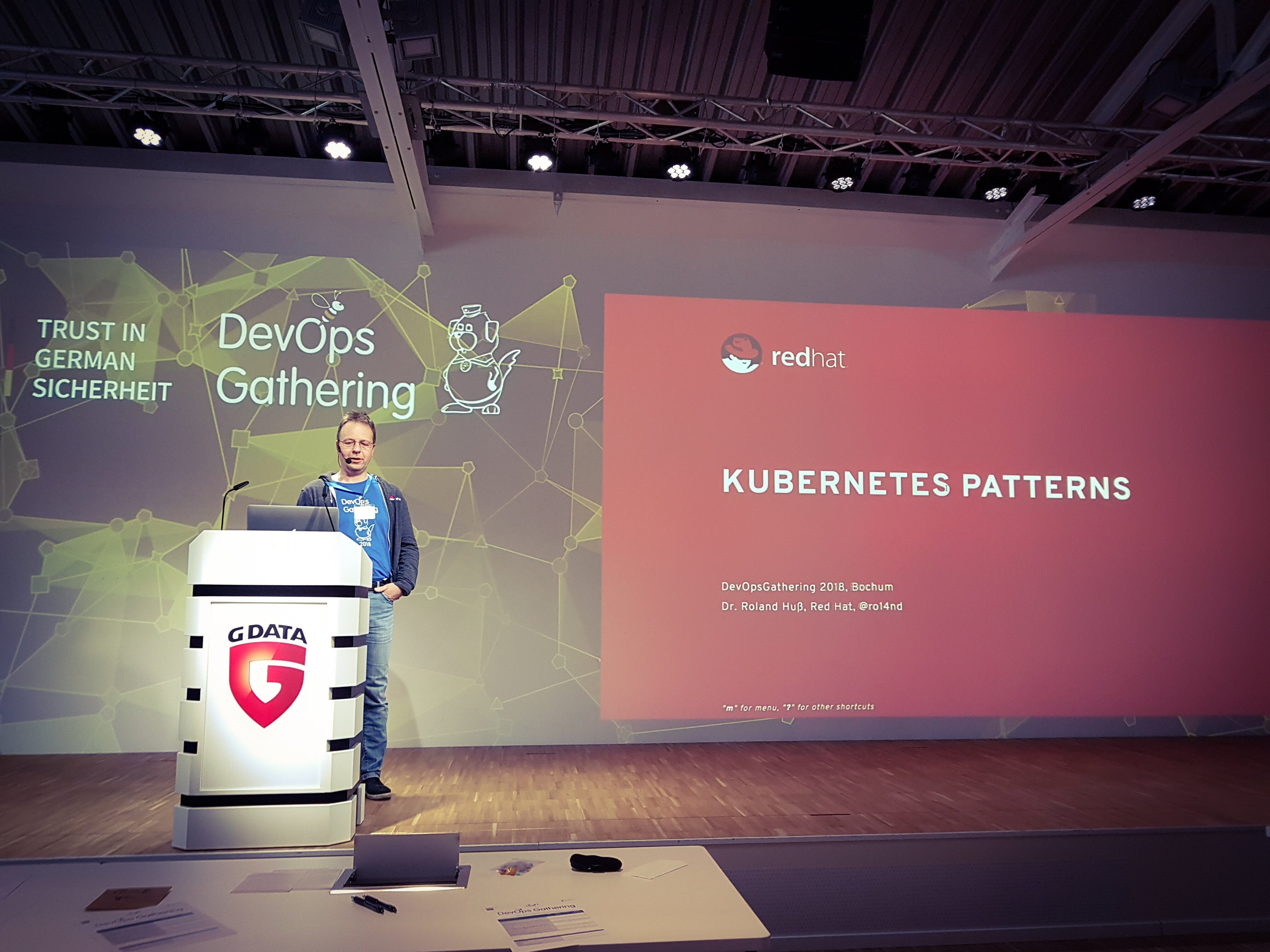 Back to infrastructure patterns – there’s a lot more to say as Roland Huß from RedHat proved in his talk “Kubernetes Patterns“. A design pattern describes a repeatable solution and it has a name, so everybody knows what is meant if somebody proposes a solution in a discussion. It is some kind of useful abstraction. Some of the presented patterns are: automatable unit, canary, blue-green, initializer, EnvVar configuration, configuration template and container volumes. They are separated in pattern groups like configuration patterns and structural pattern. 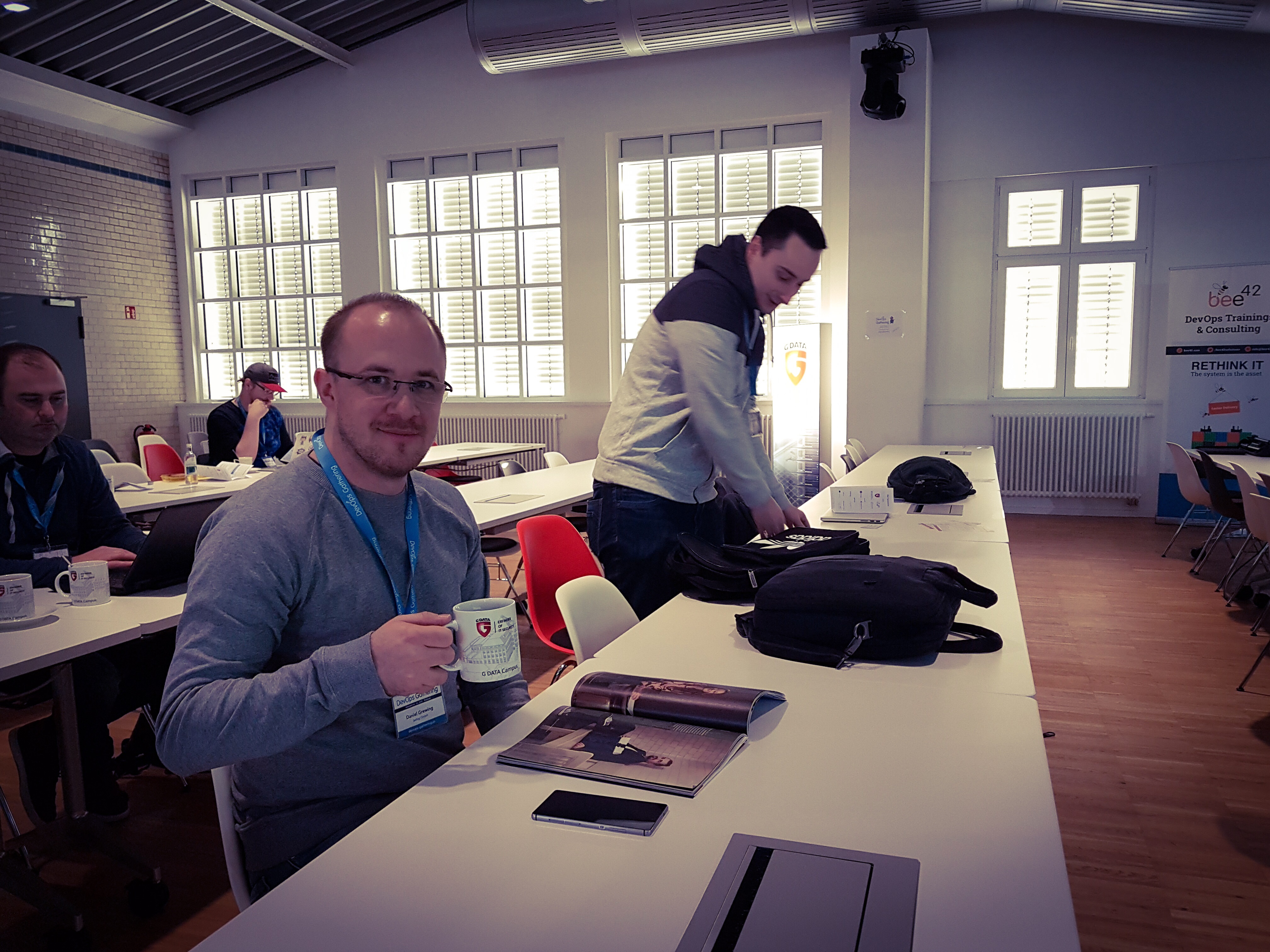 The last talk for this day was of the organizors of the conference, Peter Roßbach and Niclas Mietz, from bee42 solutions called “Container Software Supply Chain“. This has nothing to do with SCM from the logistics side but with the supply chain of a (Docker) container. They proclaimed: everything should be in a container. There should be an automatic test infrastructure and container stack. Cache the images to load them quickly, use multistage image builds and the most important one: build image from trusted company sources and without free internet access. The speakers have presented a checklist to increase the security of the container stack:

And finally the party everybody was waiting for started. All the IT maniacs came down with smoking heads to drink, eat and have fun. Guido Brackelsberg and Jakob Gielen, the board members of Setlog, as well as some colleagues of limbiq, Setlog’s new founded subsidiary, joined the company. The brains cooled down while the stomachs, tongues, jaws and livers started their engines. The playground for networking was set. 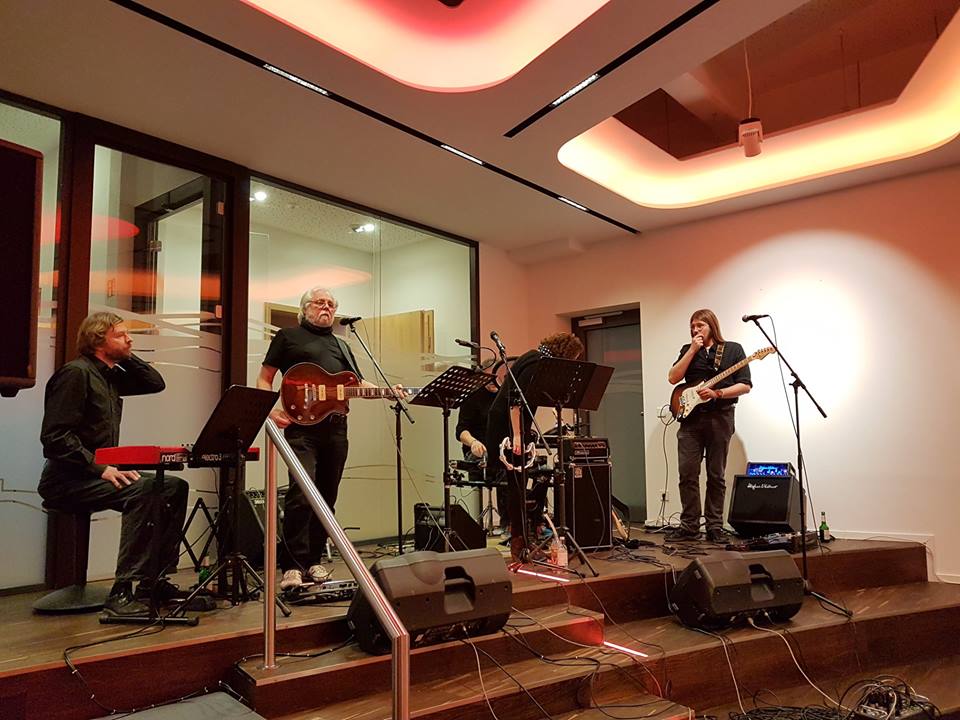 One of the speakers, Kevin Wittek, was there with his band so we had groovy life music all night long. And then there was that song where everybody stopped talking, cheered loudly and sang along feeling like being a big happy sweat covered wild and free community of pioneers, IT rocking rockers and lateral thinkers:

Take the world in a love embrace

Fire all of your guns at once

And explode into space

We were born, born to be wild

We can climb so high 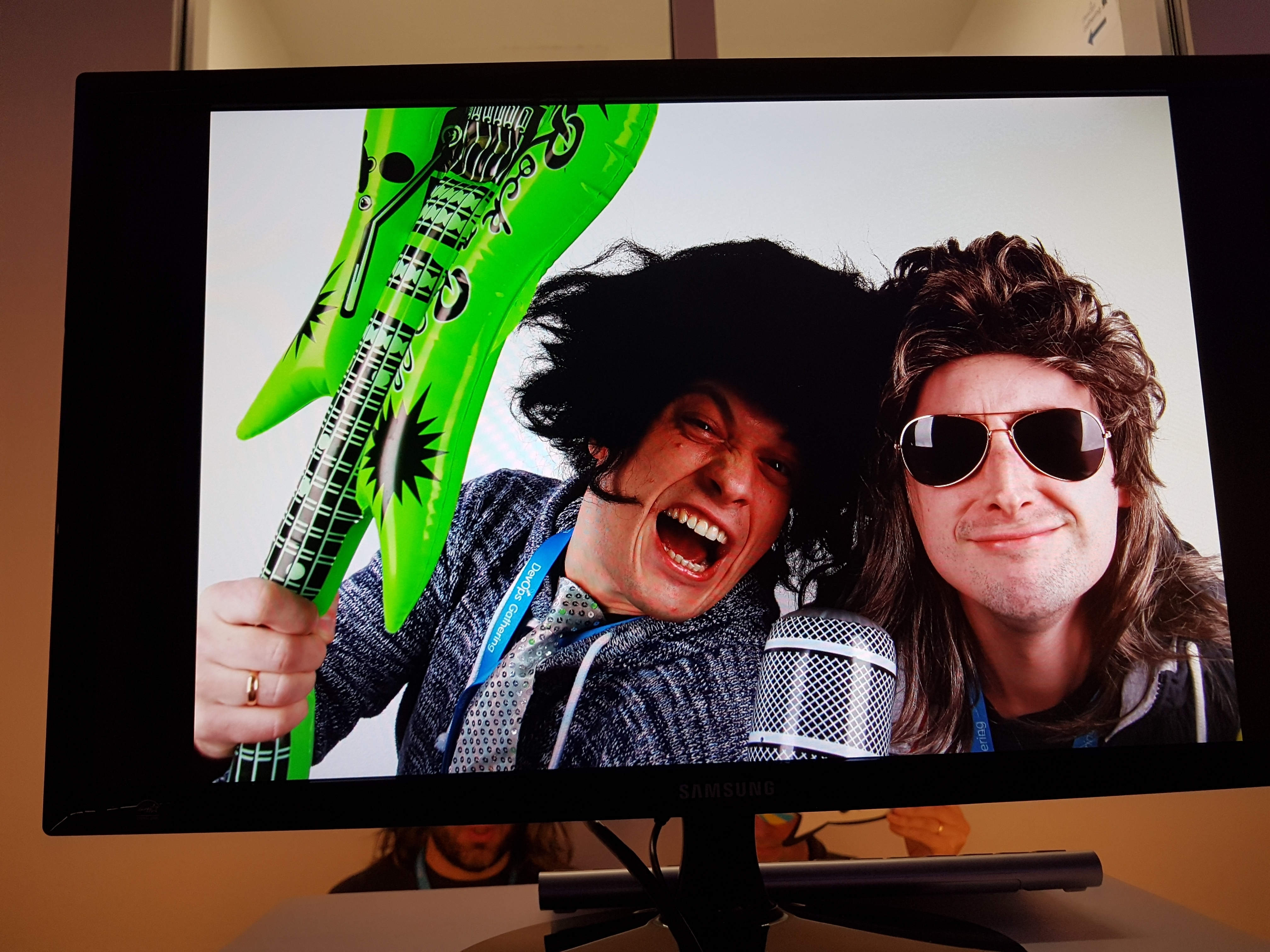 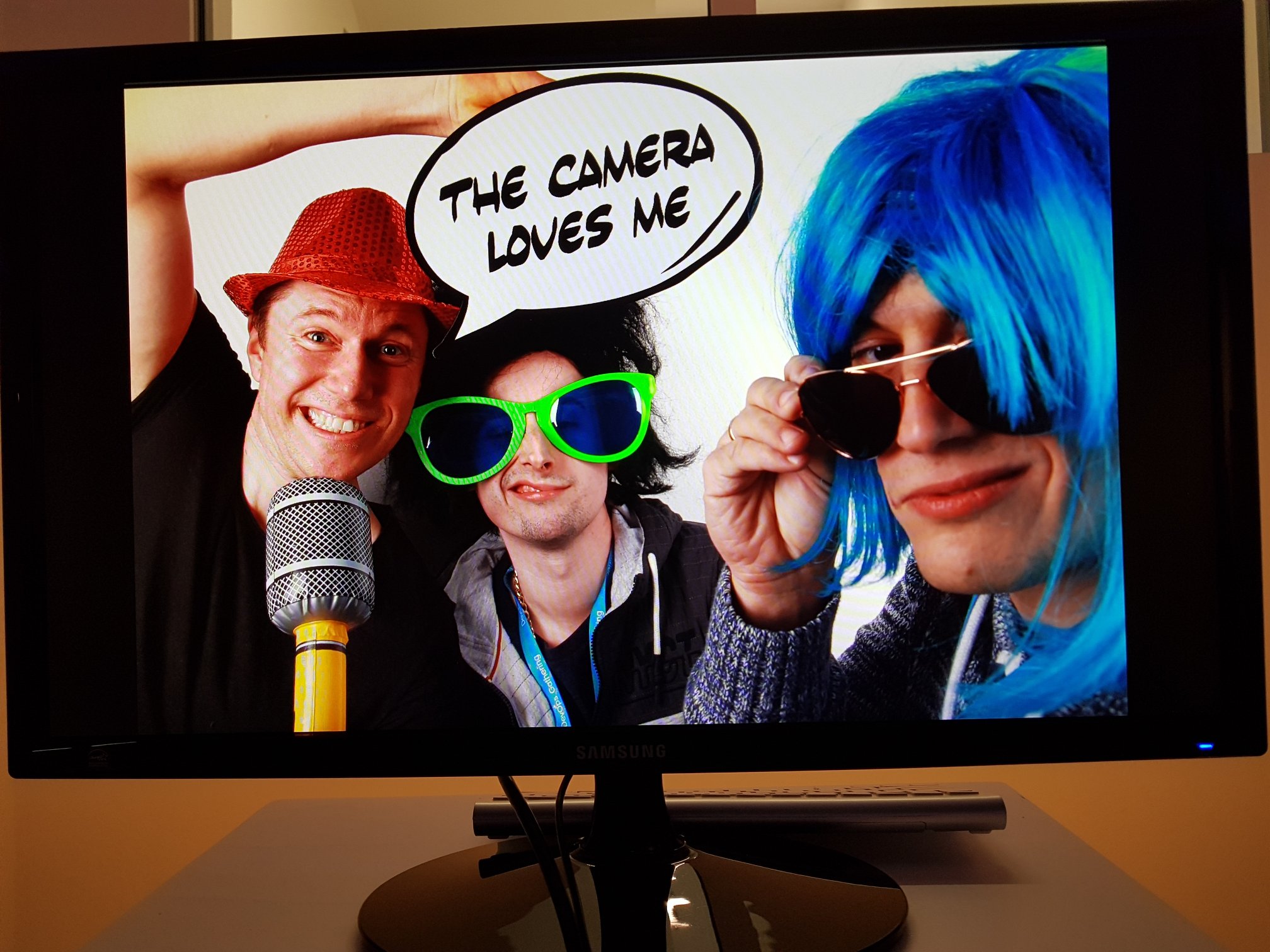 Tobias, one of the Setlog colleagues brought his famous. incredible private project: the photobox! It’s some kind of automatic selfie maker taking four pictures in a row and printing them immediately. After all the taken pictures were shown on a big monitor behind the box in a random order, so everybody could see the results all the time.
That was the point when the fun really began! Everybody wanted to take funny pictures of themselves with crazy colourful hats, wigs, glasses, feathers and other accessories. By the way: this was the surprise we all were curious about!
At Setlog we already tested Tobias’ photobox on our christmas party and it has really spiced up that legendary event!

GDATA has its own feel good manager. This is a guy who is responsible for keeping the average standard of good mood in the company on high value. At the party he was responsible for distributing the best wine from the cellar of GDATA. At Setlog we have several feel good managers, too. They are the dogs of some of our colleagues accompanying us all day, begging to be entertained and cuddled.

It was late in the night when it was getting quiet in the old campus. Some of the last hard-bitten moved to the academy to cool down and drink the last beer.

Eduard is a software developer in our “Globetrotter” team at Setlog. Globetrotter is working closely with our NYC team and is responsible for all of our American customers. Eduard is one of our most creative minds, always happy to indulge in new ideas and will give all of you an insight on what life at Setlog is actually like.