Aeronauts, we celebrate you!

It all started with a dream, paired with a lot of courage and a kite. Thank you, Ikarus, for your courage. The term aviation was shaped in the 19th century following seafaring. The former aeronauts are today called pilots and enjoy a similarly high reputation as their colleagues – the captains at sea.

August 19th, 1911 might be just a marginal date in the history of aviation but for the air freight in Germany, that date is the hour of its birth. In August 1911, a single-engine Harlan took off from a grass runway in Berlin Jahannisthal as a mere freighter with its destination Frankfurt an der Oder. On board, she had the freshly printed Berliner Morgenpost. The cargo should be characteristic of the development of air freight in the coming centuries. Because, as is well known, nothing is older than yesterday’s newspaper. Print media is a perishable commodity, just like the ripe mango from Assam in India or the roses from Kenya or the freshly caught lobster from Canada. If they were on their way by ship, we wouldn’t be able to enjoy these goods, as they would have been spoiled or even unripe, when they finally arrive. The globalization of the world economy and the relocation of production sites would not be possible without the fast and reliable transport of goods worldwide. The relocation of production sites has long been dependent on air freight, without it, world trade would no longer function.

Goods that are good, expensive, perishable and fresh from the press usually travel on board a cargo aircraft or in the cargo area of a passenger aircraft.

Even today, Lufthansa Cargo loads around 2,300 tons of print media per year, despite competition from electronic media. This translates into about 25 fully loaded wide-body aircrafts.

Of course, this volume and the resulting increase in air traffic also makes people think. The impact on people and the environment is being questioned more and more critically. How does air traffic affect our climate and how does it affect the health of people and animals? It is undisputed that the increased volume of air traffic is contributing to climate change, because the combustion of kerosene produces climate-damaging exhaust gases. They consist mainly of water vapor, carbon dioxide and nitrogen oxides. These substances have a three times greater effect at lofty altitudes than on the ground and increase the greenhouse effect accordingly. In particular, the cirrus clouds created by the contrails and aerosols (e.g. soot) of air traffic heat up our atmosphere. They reduce the heat reflection from the ground into space. Critical voices will certainly now want to lead the other modes of transport, but they are not our topic right now. 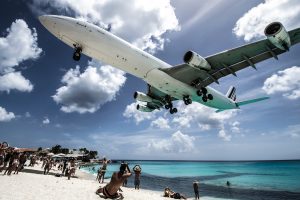 We all contribute to a bad environmental balance by the transport carrier airplane with the purchases of e.g. flight mangos or the vacation flight into the sunny south.

The health aspect of aircraft noise should not be ignored also. Almost 40% of the German population suffers from aircraft noise. Continuous aircraft noise increases the risk of cardiovascular diseases and heart attacks. Aircraft manufacturers have already developed quieter engines, but this makes the improvement almost impossible due to increased air traffic. Now, of course, it can be said that everyone who lives in the flight corridors of airports consciously accepts this burden. But we think that this statement is only acceptable to a limited extent, but we are happy to leave it open for discussion. The fact is that every mode of transport causes traffic noise and that this noise is not good for the health of local residents.

But what can we do to avoid overburdening the climate and damaging the health of others, ultimately through our purchasing behavior?

We from Setlog help with OSCA to optimize the supply chain of our customers. The close cooperation of all partners on a common platform creates maximum transparency. Expensive and climate-damaging transports by air freight or half-full sea freight containers can thus be avoided. With an optimized, digital solution, companies can react much faster to market conditions, which reduces environmental pollution and saves additional costs.